Kudos is a diaper business that manufactures 100% cotton disposable diapers. This disposable diaper was created by MIT engineer Amrita Saigal. No plastic is used in Kudos diapers and it keeps baby bums completely soft.

When she was 30, a friend had a baby and wanted a diaper that followed the principles of elegant sustainability. She wanted a disposable diaper that was as convenient and as sustainable as cloth diapers. Keeping this thought in mind, Kudos was born.

The disposable diaper was first invented by Marion Donovan and it was patented in 1951. The market size of the baby diaper industry in the United States is expected to be $7.74bn in 2023. Huggies and Pampers are the two biggest players in this diaper industry which have taken 80% market share.

Polypropylene and polyethylene are used in most diapers, including big brands Huggies and Pampers. The company claims that it is replacing 500 million plastic pounds through its disposable diapers.

Amrita Saigal appeared in Shark Tank Season 14 Episode 10 with her product MyKudos and demanded $250,000 for a 5% equity at a $5 Million Valuation from the sharks. Shark’s help is needed to make this business big. 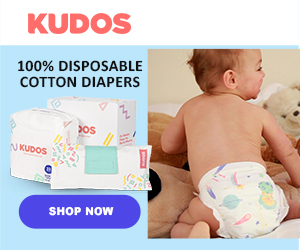 Contents show
1) What Is Kudos?
2) Who Is The Founder Of Kudos?
3) Kudos Before Shark Tank
4) How Was The Shark Tank Pitch Of Kudos?
5) What Happened To Kudos After The Shark Tank?
6) Kudos Shark Tank Update
7) Kudos Funding List
8) What Is Kudos Net Worth?
9) Is Kudos Still In Business?
10) Kudos: Latest Deals, Promo Code & News
11) frequently asked questions
11.1) What is Kudos worth?
11.2) Who is the Owner of Kudos?

Kudos is a disposable diaper made from 100% pure cotton. Cotton is great for sensitive skin as it is naturally soft, hypoallergenic and free from skin irritation.

The plant base materials used to manufacture Kudos diapers are cotton, sugarcane and trees. They source all their cotton from farmers in the United States. They use specially TruCotton (TM) as cotton.

Who Is The Founder Of Kudos?

Amrita Saigal is the founder and CEO of Kudos. She studied MBA from Harvard Business School after studying mechanical engineering from Massachusetts Institute of Technology.

She has worked in various job positions for 2 years. In 2009, she launched the business “Saathi”, which makes biodegradable sanitary pads from banana tree fiber for India women.

From 2016 to 2018, she worked as the Head of Business Development & Community at Thunkable. In January 2019, it launched Kudos.

The head of marketing for this disposable diaper business is Moira Finicane and the engineer is Jim Keighley.

Before launching Kudos, Amrita had made biodegradable sanitary pads named Saathi and she had given these to thousand of women in India.

Kudos disposable diapers were invented by Amrita to solve her friend’s baby’s diaper problem. On April 2021, Amrita won an amount of $25,000 as a runner up in Harvard’s Annual Business Competition.

How Was The Shark Tank Pitch Of Kudos?

Amrita enters the shark tank wrapped in a plastic cover and asks the sharks for $250k for 5% equity. Amrita tells Shark about her premium disposable diaper product.

This product was launched in the market 1 year ago and in the first year she made $850,000 in sales. All these sales have come 100% directly from the consumer.

This is not a completely bootstrapped startup, Amrita has raised $3.2 million in funding so far. Amrita raised the last funding at $12.5 million valuation.

It’s not profitable yet. Since starting the business, she has lost a total of $1.5 million. Amrita estimates that it will do $4.5 million in annual sales by 2023.

The landed cost of one pack of diapers is $39. In the first year she spent a little over $100k in the market. Their customer acquisition cost is $23.

3 weeks ago they launched baby wipes, they are expecting to launch training pants and swim pants. Mark Cuban and Gwyneth Paltrow Have Team Up to Offer $250K for a 12% Equity.

What Happened To Kudos After The Shark Tank?

Disposable eco-friendly diapers business kudos got a deal in Shark Tank. The founder of this company Amrita is a mature entrepreneur and she has very good knowledge of business.

Amrita pitched very well in Shark Tank and explained her business to the sharks like a proper business woman. Mark and Gwyneth made an offer to Amrita before all the sharks got their opinion on this business.

After this episode of Shark Tank aired, Amrita shared a video on Instagram account @kudostobaby and said thank you to all the people. By using the promo code “BABYSHARK” you can avail 10% discount on each diaper pack.

In this way, many mothers shared their true opinion about this pure cotton premium diapers on social media.

She is impressive and a fabulous salesperson! #Kudos#SharkTank

We’re following Amrita Saigal along with her company for further updates.

Amrita told in Shark Tank that she has raised a total of $3.2 million funding till January 2023.

What Is Kudos Net Worth?

The current worth of disposable diaper business Kudos is $3.2 million. The company raised $2.4 million investment funding from 9 investors in the seed round in 2021.

The worldwide baby disposable diapers market size was $43 billion in 2020 and the industry is expected to reach $60 billion by 2031. With the increase in population in the world, the growth of this diaper industry is also increasing very fast.

Is Kudos Still In Business?

Kudos disposable diaper subscription box business has been running successfully since 2019. Along with the diaper product, the premium wet wipes product is also getting a very good response from the people.

You can buy these products from the official website mykudos. The price of this product has been kept according to the size.

This disposable diaper business has been featured in many media publications such as Fast Company, Forbes, The Boston globe and many more.

The headquarters of this company is in Boston, Massachusetts, United States and it employs 2 to 10 people.

Yes, Kudos is still in business as of January 2023.

Follow @sharkatanktalks1 for latest updates and promo codes related to this product and company.

What is Kudos worth?

The current worth of Kudos Company is $3.2 million.

Who is the Owner of Kudos?

Kudos was launched in 2019 by MIT graduate Amrita Saigal.